Home » News » This is what motherhood is all about, watch what does a cat carry in its mouth

This is what motherhood is all about, watch what does a cat carry in its mouth 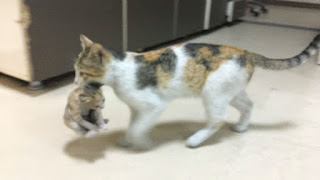 This is what motherhood is all about, watch what does a cat carry in its mouth
Istanbul: a mother cat carries its sick kitten in its mouth and walks straight into the hospital. This video is becoming viral around the world. While the whole world is affected by the corona Pandemic, this incident took place in Turkey, Istanbul

Due to the Corona virus attack all the hospitals in city were filled with patients. There is no pace in the world, where corona hasn’t stepped its foot in. In such an emergency situation from nowhere a cat run into the emergency ward of the hospital carrying its little kitten in its mouth. All the doctors were stumbled on seeing this little cat. The Doctors and the staff members tried to get the kitten from the cat’s mouth but the mother cat denied to handover its kitten to them, it confirmed that the kitten was sick and hence the cat carried it to the hospital.

Then they tried to console the kitten and fed them milk and food to eat and after sometime they took the cats carefully to the veterinary hospital. This news was shared by Merv Aaskan in their twitter page.

In that,” today we were working in the emergency ward in our hospital and suddenly this kitten run into the room carrying his little kitten. Now the sick kitten is getting treated. Till now more than 82,000 members have liked this tweet. Many people have also shared the post. In the current world, where people find no mercy among other people, even the doctors who risk their lives to safe ours are thrown away after their death in this pandemic situation. In such a worst world still there are people who save and respect mother’s love even for animals.